Not Only is She The Owner, But She’s A Hair Loss Reversal Success Story

Back in 2013, Anderia Kowalski, the owner of Capilia Orlando, noticed what she became all too familiar with after working with numerous female hair loss clients, yes the beginning signs of hair loss. Anderia’s hair loss was centered around the front of her hairline. So what did Anderia do? She put herself on a hair regrowth regiment tailored to her specific hair loss problems. It involved using the correct hair loss shampoo, laser hair therapy. Hair regrowth began. 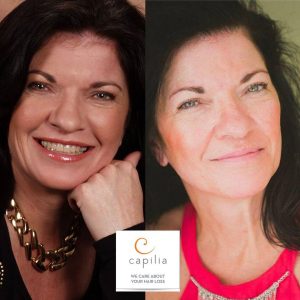 The photos in this blog were taken at different points. The left half of the image has a photo of Anderia taken in June of 2013. The right half of the photo was taken mid 2015 – roughly two years later. Her widow’s peak is no longer disappearing and by staying on top of her hair loss prevention routine, she’s been able to maintain consistent hair regrowth. Women who suffer for Alopecia which occurs as we age have the ability to reverse this process. It’s not an instant hair loss reversal process, it’s starts with stabilizing and stopping hair loss, followed by hair regrowth over time. The key to success is following the regiment and being patient. Clients typically see promising results anywhere from 6 to 9 months and within 24 months the difference is substantial.

If you are experience female hair loss, don’t hesitate to come in for a free hair loss consultation. Anderia is committed to helping individuals with all stages of hair loss.